In the mid to late 1980s the City approved funds to dredge White Park pond and add stone to the bottom of the pond to prevent weed infestation. The area known as the cove was not done at that time, and continues to be a weed problem each year, these weeds over time have expanded and are now infesting almost the entire edge of the pond.

In the FY22 CIP#51 budget, there was $210,000 approved to dredge and clean up the west end of the pond. Dredging will remove approximately 4 feet of material. This area of the pond has not been previously dredged.

However, with the explosion of the Lotus plant we needed to step back from the original goal and we are now looking at an overall pond restoration project, one that looks at the immediate need to remove the Lotus plant that now covers half of the pond as well as the dredging of the area that was not completed in the 1980s.

Original FY22 project was area in red, we are also now looking at the area in blue (Lotus plants)

Lotus is the primary plant genus of concern within the pond at this time. There are two species of water Lotus known to exist in North America. American Lotus (Nelumbo lutea) is native to the southeast United States, Central America, and the Caribbean. It is non-native to New England states and in Connecticut is listed as potentially invasive and prohibited under Connecticut General Statute. Neither species are currently listed by NHDES as an exotic aquatic species in New Hampshire. Due to the invasive growth habit of both species, the pond is at risk to become overgrown with Lotus if left uncontrolled. The Lotus plant is invasive to the White Park Pond as it will take over the pond in a couple of years. Although we do not know for sure we assume the Lotus plant, like the Koi fish in the pond was placed there by someone.

In the late fall of 2021, we hired a company to mechanical harvest and remove the Lotus plant. This cutting did not kill the plant, only removed the plant material to ensure there was the ability to have safe ice during the winter months. If left, the stems of the plant would allow weak ice to form and may have prevented us from maintaining the pond for winter ice skating. Just removing the plant will not prevent the Lotus from growing as the seeds can remain dormant for years. 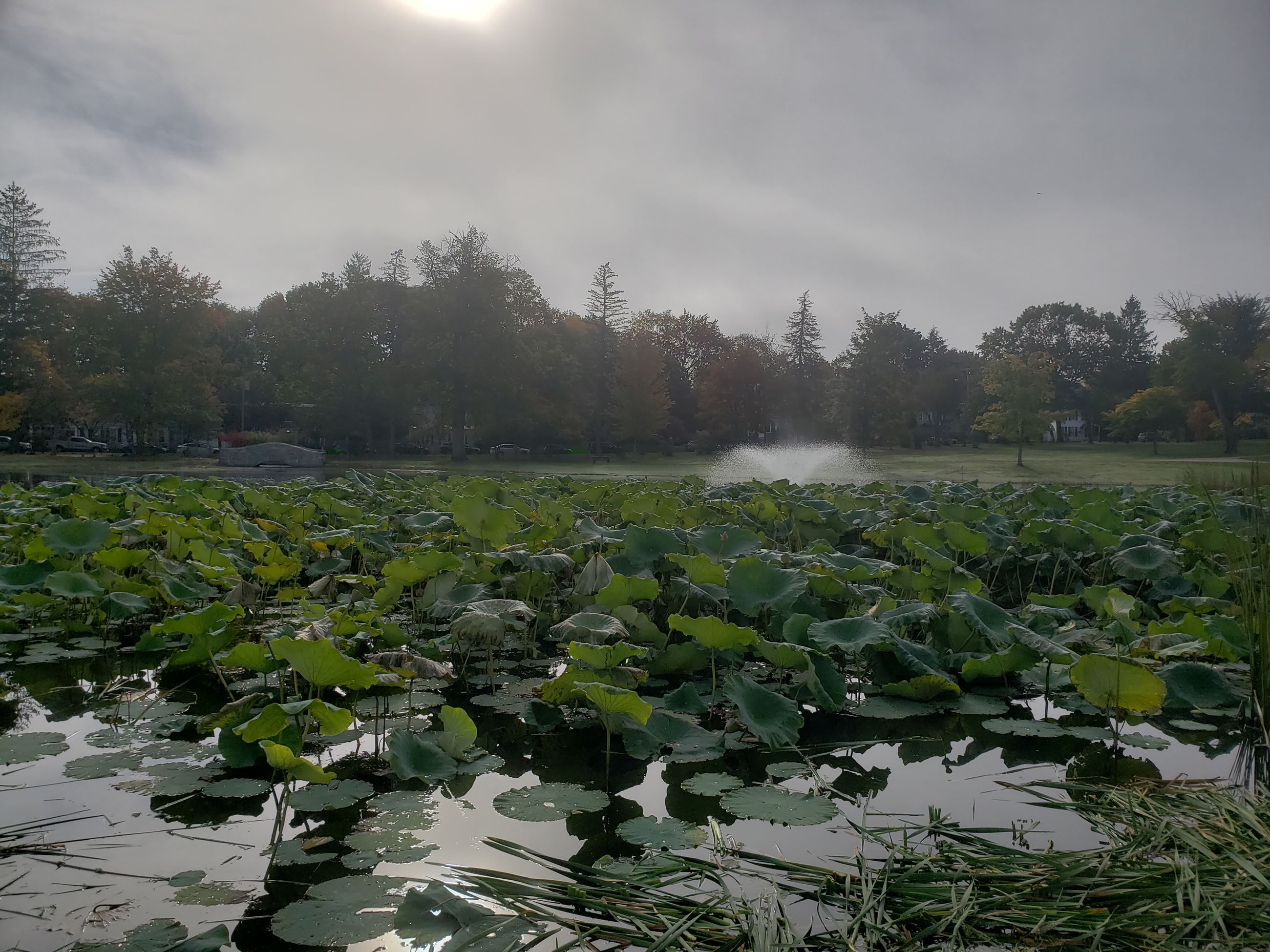 What we are doing

Working with VHB and DK Water Resources the City is working on a pond restoration project that would be completed in 2023. There are two main options we are currently exploring that will hopefully eliminate the Lotus plant and clean out the area that was not dredged in the 1980s. As the Lotus plant can remain dormant in a pond for years we are also developing a pond maintenance plan for the city to follow. In addition, we have measured over a foot of organic debris (sediment) in the west end of original section that was dredged. Removing this sediment will help restore the water quality and original depth from the 1980s.

We are currently reviewing projected cost and permitting needs for two options:

Both options require the material that is removed to dry on site prior to removal and permitting from the State.

The challenge with either option is there is no guarantee the Lotus plan will be fully removed from the pond and this is where a pond maintenance plan comes into play. After the initial clean up, the City will be looking into steps to follow to help keep the Lotus plant from returning, what we need to do to improve water quality, and best management and maintenance practices going forward.

We anticipate a final recommendation with cost estimates and what, if any, permits may be needed will be completed by January 2023. We will then be able to start the permitting and RFP process for the work to be done in 2023.